Tour de France, the biggest cycling race in the world 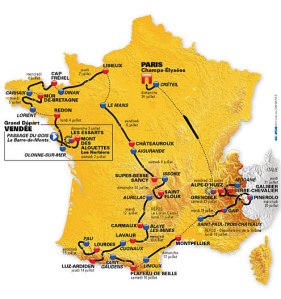 The Tour de France, the biggest cycling race in the world, crosses towns and countryside as well as plains and mountains, giving those who enthusiastically follow its route the opportunity to discover monuments fashioned by the hand and genius of man.
The Tour de France, more than one hundred years old, now gives millions of television viewers from 190 countries throughout the world the chance to discover these master-pieces and in particular those that the French State entrusts to the Centre des monuments Nationaux (national monuments centre).

It was therefore only natural that a partnership was founded between the Centre des Monuments Nationaux and Amaury Sport Organisation.
Whether erected on outcrops, enclosed by walls or moats, urban monuments, archaeological sites, Renaissance palaces, eighteenth century follies, writers’ or statesmen’s residences or national domains, eleven of these unchanging witnesses to history, including the Abbey of Mont-Saint-Michel, the Château d’If castle, the city of Carcassonne, the towers and ramparts of Aigues-Mortes, magnified by the splendid images produced by France Télévisions, will serve as the majestic setting this year for the one hundredth Tour de France, up to the final stage around the Arc de Triomphe.

“It is a real honour for the Tour de France and a source of great pride for its organisers to seal a partnership with one of the most prestigious institutions in our country. This display of recognition and trust will leave a long-lasting mark on the celebrations of the one hundredth Tour de France that will finish in an exceptional sound and light show with the Arc de Triomphe as a backdrop,” declared Christian Prudhomme, Director of the Tour de France.

As regards Philippe Bélaval, President of the Centre des Monuments Nationaux, he said he was “overjoyed to see the partnership with the Tour de France strengthen the authentically popular dimension of French national heritage, with its roots in each region, open to all and offering, in the same way as sport, incomparable moments of shared thrills”.